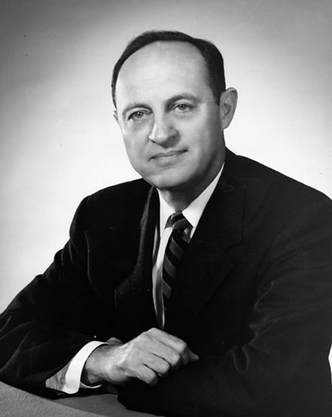 Image from the "And Justice For All" project by the Durham County Courthouse Art Wall, found here.
Evans grew up challenging the practices in place that prioritized white communities over black communities. On his way to becoming mayor, this Jewish leader involved himself in bringing the agency of blacks to the forefront of Durham. He helped lead the Lincoln Hospital, a facility that worked to serve the black community in a variety of ways (1). In its most obvious form, the hospital served as a place of health and wellbeing. Looking deeper into this relationship, the Lincoln Hospital forged connections between interracial groups to encourage dialogue and friendship. Through his leadership, Evans acted as a model by reaching out and helping an identity that normally was not recognized equally. This work influenced his founding of the Human Relations Committee during his time as mayor. Through his business practices, Evans served on many multiracial committees that developed links between black and Jewish Durham residents. He owned his own business at one point, Evans United Department Store, and was consistently acknowledged for being the only integrated lunch counter in Durham (2). When he was told that he was no longer allowed to host an integrated lunch counter, he immediately removed the countertop but kept the policy of integration, encouraging blacks to inhabit and call this space their own (3). He represented a figure who honored his value system over the normalcy of rejecting communities of color. After this public support of desegregation, he joined the Citizens for Good Government Committee that focused specifically on promoting equity and accessibility of resources throughout Durham and greater North Carolina (4). Durham needed a pioneer like Emanuel Evans to illustrate the importance of Jewish voices in speaking out against racism and injustice towards blacks, and he demonstrated his capability to be that leader through his prior work for social justice before being elected mayor in 1951.

Once elected, the early part of Evans’s time as mayor focused on uniting black and Jewish identities to work together as opposed to settling on a relationship of injustice. The morning after Evans’s first victory as mayor in 1951, The Durham Morning Herald reported that it was the “Negro vote” that clinched him the victory as mayor and gave him the political power to implement change (5).

Evans established the Human Rights Committee in his fourth term to continue advocating for increased relations between the black and Jewish communities. This group committed itself to “keep[ing] the lines of communication open between the races…a most urgent and vital matter” in Durham during the Civil Rights Movement (6). Because his platform as mayor was rooted in bringing different members of different communities together, he focused on race relations and religion (7). Evans believed so deeply in the role of Jewish activism in working to empower other marginalized groups and created a working group that looked for practical solutions to improve Blacks’ role in Durham and in the South.
​
While encouraging constant interaction between people of different races to develop relations, he also proactively worked to decrease the barriers present that prevented the black community from achieving equality. In a movement filled with black agency and desire for full autonomy, Evans advocated for these groups during this transformative time in Durham. As mayor, Evans supported the desegregation of businesses that would serve customers of all colors (8). By taking action, the mayor directly interacted with the white business sector to ensure that this community was meeting the demands of Black Durham residents as well. He also fought for equitable housing by prioritizing earning grants that would service low-income housing areas (9). Evans would follow these efforts with desegregating public services like the police force and fire department, continuing to combat overt racism that prohibited this community from being seen as equal (10). Through tangible policies and actions, Evans fought alongside the black community to enact change.