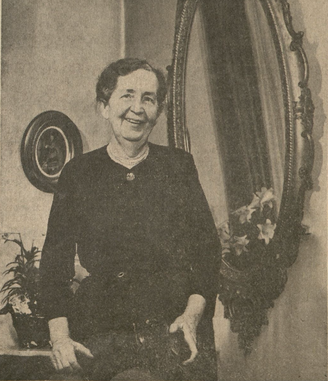 "Durham 'Mother of Year' Pioneer Woman Lawyer." April 19, 1961. Box 1, Folder: Everett, Reuben Oscar Clippings. R. O. (Reuben Oscar) Everett papers. Rubenstein Rare Book and Manuscript Library, Durham, NC.
Kathrine Robinson Everett played an extremely important role in justice for all through her positions as lawyer, city councilwoman, and much more. Everett represents one of the first two women elected to Durham city council in 1951, a year that exhibited much change in the demographics of political leadership in this city (1). Because of Everett’s husband's many roles in Durham during the same time, it was particularly difficult to find information and events that specifically related to her as a woman uniquely in a position of power. When she was mentioned in various newspaper articles and other materials, she often was referred to as Mrs. R. O. Everett, showing the gendered language that prohibited many women from speaking up and leading a group like Kathrine Robinson did through the mid-20th century (2). Even so, she still represented a voice of hope for all women to play a prominent role in society.

Before assuming the role as councilwoman, Everett found herself extremely involved in the Durham leadership. As a mother, she recognizing the importance of an education and wanted to give back however she could. She often volunteered through the Parent Teacher Association (PTA) to inspire the future generation (3). This allowed her to understand how schools worked and would eventually allow her to serve in a role as a leader in improving Durham’s schools as councilwoman. She herself was one of the only women to graduate the UNC School of Law in 1920 (3). She used her education to make a difference in the judicial system. Serving as a prominent lawyer both locally and nationally, Everett became the first woman to argue and win a court case in front of the North Carolina Supreme Court. Her leadership inspired the next generation of leaders during her integral years as councilwoman of Durham. She also held prominent positions at the President of the North Carolina chapter of the United Daughters of the Confederacy and religious mentor through her church (4, 5).

She also carried a large Americanism pride and must have used this sentiment in attracting many voters during the 1951 election. She often gifted North Carolina flags to various public spaces within the state as a way to extend her satisfaction of the political system to others. This could be seen as a very appealing characteristic of someone who would eventually serve in a role of representation to enact change that would better North Carolina as a whole. On a larger scale, she possessed a short story that expanded upon her love for the United States. In I Speak for Democracy, the author prides the United States on their resilience and strength throughout history, and Everett must have used these guiding principles of nationalism in running for an elected position (6).
​
By 1951, Everett recognized her potential as a leader who could serve the people by running and eventually winning the city councilperson elections. Along with Mary Duke Biddle Trent Semans, Kathrine Robinson Everett became the first woman to serve Durham in this prestigious position. She would serve as councilwoman for twenty years in Durham, concentrating mainly on increasing female representation in all fields of education. Her legacy lives on today in many ways, including the UNC Law Library being named in her honor (7).