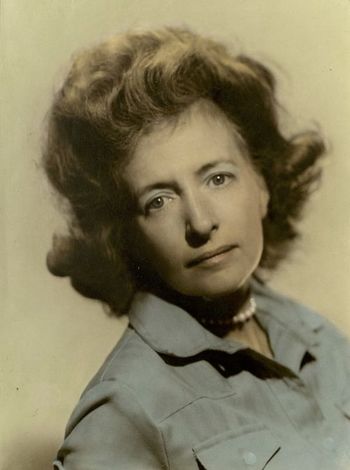 Photo of Mary Semans. Photograph. Box 86, Folder: Semans, Mary DBT 1940s-1980s. Semans family papers, 1878-2008 and undated. Rubenstein Rare Book and Manuscript Library, Durham, NC.
Mary Duke Biddle Trent Semans represented the progress and spirit of a developing Durham. Related to Washington Duke, the founder of Duke University, Semans worked diligently in the field of education and accessibility to ensure that different demographics of people could serve in political positions. Her life began and ended with a career in activism that sought to widen the reach of those whose voices were being represented in the government and other systems controlling aspects of Durham culture. One of her many accomplishments is being elected in 1951 as one of the first two city councilwomen in Durham (2).

Semans joined the Lincoln Hospital, a space that focused specifically on providing equal and accessible resources to the sick black community, as a volunteer in 1948, exemplifying her awareness of the injustice that this marginalized community faced on a daily basis in Durham. She not only sought to use her voice as a white woman to speak against policies of racism and discrimination that plagued the American South during this time, but also recognized that her voice was not always taken seriously due to the weakened role of women during this time. She felt compelled to empower women’s voices and make them heard amidst a changing Durham and thus ran to become the first woman on the city council. Along with Kathrine Robinson Everett, Semans won the election in 1951 and began to serve all people of Durham through this position (3).

This fulfilling role became a platform for Semans that would allow her to serve many more people throughout her lifetime. Two years into her city councilwoman position, she was named Mayor Pro Temp and assumed the responsibilities that came with this important role (4). In 1958 in the heart of the Civil Rights Movement, Semans was named to the newly-founded Human Relations Committee. Inspired by Rencher Nicholas Harris and established by Mayor Emanuel Evans, this committee served to promote and encourage interracial dialogue in Durham to better represent all residents. During the first meeting, she was unanimously elected as secretary for this impactful organization (5). She kept minute meetings throughout her time on the Human Relations Committee and contributed to many important conversations regarding the desegregation of Durham public spaces. She recognized the importance of her work by reaching out to other cities who had implemented similar organizations to try and improve race relations within the city boundaries (6).
​
Through all of this work to promote social justice, Semans also worked in improving the health sector and general Duke University campus during her time in Durham. She contributed greatly to progress made in the medicinal field through grants and awards dedicated to students who were seeking to better conditions for those who were ill (7). She provided unwavering support and compassion for those interested in promoting humane practices throughout patient treatment. She was also fundamental in the continued expansion and prestige of Duke University. Semans treasured her time serving on the Board of Trustees and also implemented change to the Trinity College of Arts and Sciences program (8). Her work covers a vast area of Durham and her generosity extends to members of both the Duke and Durham communities. In Durham’s memory, she represented one of the first women voices to speak up and out for the residents of this shifting community.